Back in May 2002, my band Seraphidian went into the studio for the first time. We went to Magic Garden Studios in Wolverhampton and worked with Gavin Monahan, our producer to record our first EP. It was called Silent Aggression, had three tracks plus a bonus radio interview and it was recorded and mixed within the space of a (very, very long) weekend. We subsequently went in and recorded two follow up records over the next few years – Relentless and Caged, but unfortunately I lost my copy of Silent Aggression.

Well, while tidying this weekend, I found a framed copy of Silent Aggression, and lo and behold, the disc inside it actually had music on it. This is how it looks: 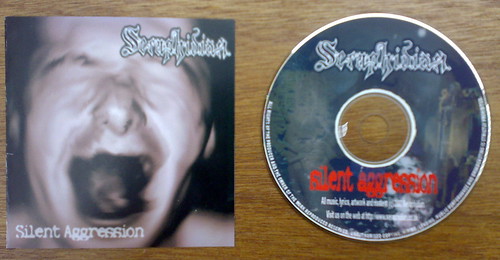 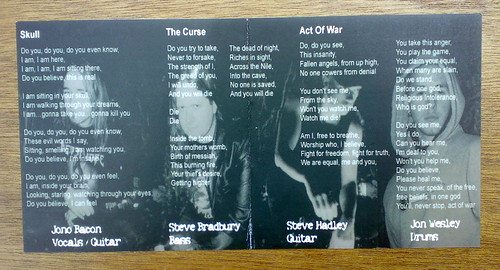 large version – Lyrics and band photos, how metal we all look. 😛

When I found it I rushed downstairs, put the CD in my CD player and the memories came flooding back. The CD has a nice warm feel to it, with a rustic thick drum sound and a bite to it. Very Overkill sounding in nature. At the time it was notably better in production quality than most bands on the scene, and this was because we worked to get in at Magic Garden; a studio that only recorded bands that Gavin, the producer (a) liked and (b) felt would reflect his studio well enough.

Anyway, I have ripped a bunch of songs and put them online for the curious and the bored. The songs I am most proud of are Act Of War and The Curse. Give Act Of War a listen for sure.

Slight trivia fact – the face on the front is my friend Lee Jordan, photographed by Soraya Nasrat and subsequently poked with in photo editing application.