I wanted to take a nice extended leave over the Christmas period, and while much of it was zipping up and down the country visiting people, I have also had the opportunity to spend some time at home. Now, this may conjour up the image of hours spent in front of the telly, watching DVDs, sipping a drink, with one hand in a box of biscuits. Well, this has happened for a few hours here and there, but I have spent the majority of time on something altogether different – my new project.

Some months back I recorded an album in 24 hours. It was fun and challenging, but for a while I have dreamed of writing, recording and releasing a full solo metal album. It has always been on the cards, but I have never got around to starting the project – writing all of the guitar, bass, drums, vocals, lyrics and arrangements for 11 songs is a pretty daunting task, let alone making it a full metal album with the associated technicality and complexity of playing involved. With a few weeks off, I figured I should roll up my sleeves and get started, and so far I am pleased with the results.

Writing a solo album means a lot of work. You can’t just think “I just need to write a bunch of songs” – keeping that much music in your head is next to impossible. As an example, a typical song I write will probably have around 6 riffs in it on the main rhythm guitar, and 4 arrangement changes in the songs. But then there are the bass playing and fills, guitar harmonies, drumming (which is a complex art in itself for the style of metal I am playing – lots of little fills and double-bass drumming), and then of course all of the lyrics, melodies and guitar solos. And, thats for one song! Multiply that by 11, and you have a lot of material – 66 guitar riffs alone, let alone all the rest of the things I mentioned. In addition to that, there is all of the recording elements – set-ups, effects, time changes, atmosphere etc, and then of course the album art, and other release elements.

So, writing an album requires a lot of work. Before approaching the project I was thinking how I could manage this workload, and importantly, how to manage it effectively. As I have rambled on in the past, I find my creative process (yes, I sound like an orange-sunglasses wearing web 2.0 arsehole, but I can’t think of a better way of describing it) to be far more on the creative side than the process side. I like to feel free in how I write, and don’t like to be constrained by things like technology and computers. Some would suggest I have a wiki, or a project management tool to manage the project, but that is just not how my creative juices flow. When I am in my studio I don’t want to think about technology, I don’t want to think about processes – I just want to write music, and ensure that I can take the raw material and make good songs out of it.

So, I have been thinking about all of this, and I have hit on my solution. Paper.

…you know…that stuff we used before computers came along…

In my studio I have 11 pieces of paper on the wall in front of my workstation: 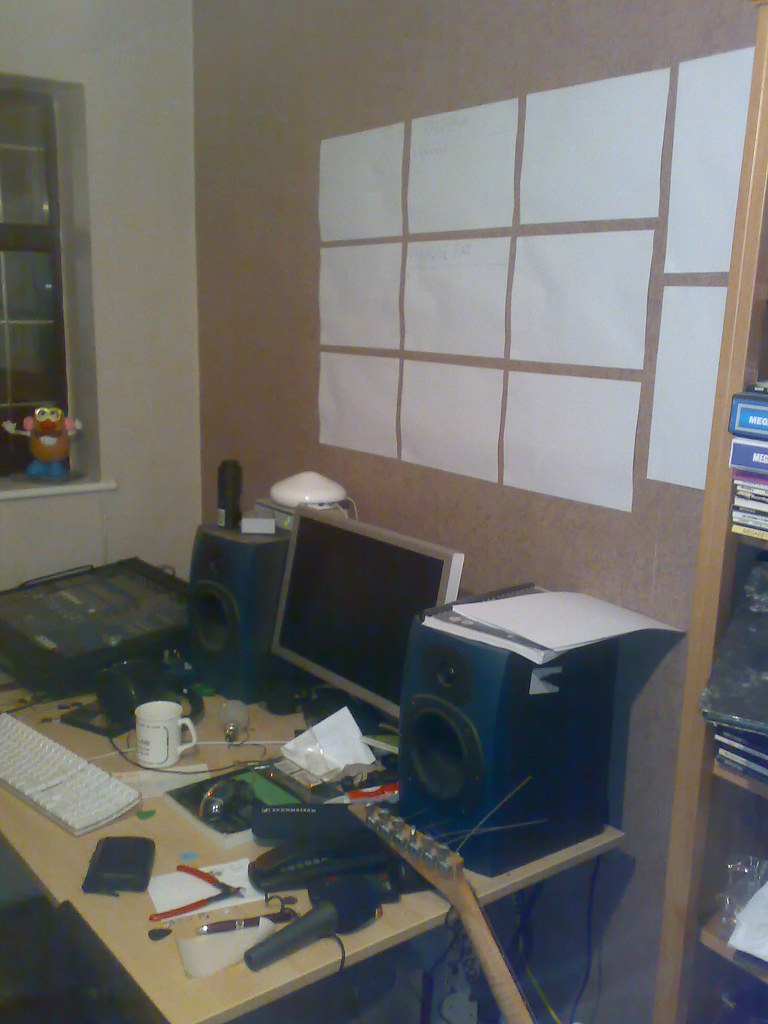 Each of these pieces of paper represent a song – you can’t see the writing in the photo above, as I write on them with pen. When I started work on the album, I created a project on my computer and record riffs that I write to it – I permenantly have a mic in front of my guitar amp, so I can load of the project and hit record and I am ready to roll. Likewise, I have a Bass Pod always plugged to work on the bass guitar elements (although this is rarer this early in the writing process) and my drums are plugged in to I can record them by just pressing the lovely big red recording button.

As I continue to write, some riffs fit together well and the kernel of songs begin to emerge. When I think a song is showing potential, I give it a nickname, as I have not written any lyrics yet and cannot give it a meaningful name. This nickname is something I can associate with that song kernel, and is invariably what the song sounds like to me – so as an example I have a song called “Pantera”, which sounds quite like Dimebag on the guitar, and a song called “Paradise Fat” – a song which my friend says sounds like Paradise Lost in the intro and then gets quite fat and chuggy.

When I have the core song structures in the works, I write on the paper the arrangement, like this:

This would be Intro Verse Chorus Verse Chorus Chorus Bridge Post-Bridge Chorus Outro. For some of the songs, with lots of strange arrangements, this can get quite complex. In addition to this, I write little ideas on the paper – song concepts, lyrical ideas when I sing along to the early recordings, potential topics for the song, atmospheric effect ideas etc. I can easily scribe these ideas on the paper and don’t need to switch out of my multi-tracker and load up another piece of software or something – I grab a pen and write it down. I can also draw little diagrams for song structures and other more pictorial notes.

As the song kernels form, I record each bit of the song as it solidifies and move it into its own space in the project – this makes it easier for me to find the completed song parts. When I have written most of the song parts, I leave the song in the main project and move onto other songs. So if you look my project, you will see a big collection of random riffs near the start (the modern equivalent of the classic riff tape), and a bunch of more complete song structures as they are completed.

Right now I am very much at the early stages of the writing process with a bunch of song kernel ideas forming, and one song completed. I am really keen for this album to capture my musical interests effectively – I want it to be diverse, crushingly heavy, melodic in parts, aggressive in parts, with real light and shade and vivid, thought provoking lyrics. I am pretty pleased with many of the initial song ideas, and I am pleased with where it is heading. We will see… 🙂