Half way through UDS

Well, we are half way through the Ubuntu Developer Summit, and the week is going very, very well. We have been having some excellent, productive discussions, and are having a lot of fun in the evenings. This UDS has felt more complete, more organised and more productive, and the feedback seems to generally fit this.

I am not going to summarise the discussions quite yet, as we hope to do this when UDS is complete, but just on the community track we have been discussion bug jams, the example content showcase, upstream bug workflow, the LoCo council, communication, burnout, the Kubuntu council, the Ubuntu Java team, Brainstorm, local language teams, community marketing and more.

I am also really pleased to see that the Ubuntu Developer Channel has been getting a lot of attention and today it is #5 Most Viewed in the United Kingdom – go and check out the videos and lets get even more attention. Also, remember that you can subscribe to the videos – over 130 people have done so in the last few days, so why not get in on the action and get new Ubuntu videos delivered to you. I have been running around UDS lining people up for Tony to video, and we have got some great interviews in the pipeline. 🙂

Just before I finish, most people have not uploaded their photos yet, but here are a few photos from UDS so far: 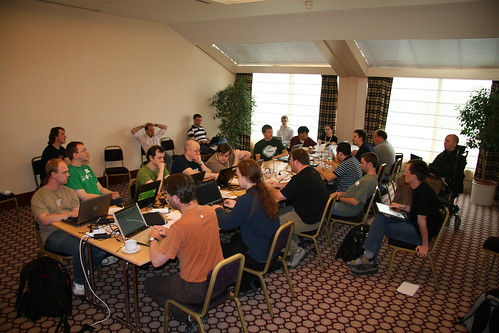 Crew and community at one

Daniel and Nitya talk MOTU in the lobby

Working together to kick arse and take names