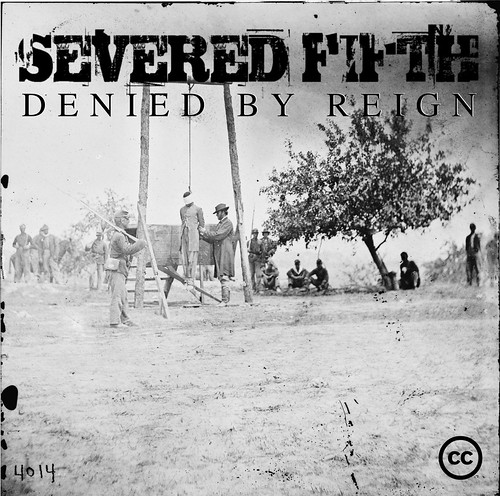 I am proud to announce the final release of the debut Severed Fifth album Denied By Reign. You can go and download it in its entirety here. There are download links for both Ogg and MP3 as well as BitTorrent links. Thanks to Adam and Neuro for providing mirrors. The full album is available under a Creative Commons Attribution ShareAlike license – you are free to copy, share, remix and sell the album if you like. 🙂

When I started working on Denied By Reign, I intended it to have two primary purpose. Firstly, I wanted it to be a good representation of my own creativity, as any musician would want. With this goal in mind, I have worked to produce a pretty thumping metal album, and I am really proud of it – I hope some necks ache out there. 🙂 But the second purpose is more important – to explore what is possible when an independent artist releases their work in the new music economy.

Today the next phase of Severed Fifth begins and in this critical time, our focus shifts to exposure. To build success around Severed Fifth, we need to get Denied By Reign in the hands and ears of everyone. The goal here is to spread the word about the album and strongly celebrate its free culture foundation. I am hoping Denied By Reign will be an example of how a free culture album can gain critical exposure and success, and how this can open up other opportunities for artists.

With this in mind, we have the Severed Fifth Street Team – a collection of Severed Fifth fans around the world who are going to help with this goal of getting the album oodles of exposure. I have heard of people who are going to print out posters and put them in music shops, burn Denied By Reign to CD and play it in clubs and venues, and one guy even talked about taking a Denied By Reign CD, putting it in a boombox and walking down his town high street.

So now this critical phase kicks off. How can you help? Well a few ideas to start with:

With the focus shifting to the Street Team, I will be posting more about this soon. Thanks everyone for all of your support. 🙂