The other day I was digging through some old articles that I wrote. To my amusement, I saw a reference to a little program I hacked up once when I was involved as a KDE developer. I had totally forgotten about it, and I figured it would be fun to share the story.

Back in the year 2000 when I was starting University, I spent every evening between midnight and 6am hacking on code. Fuelled by six cans of coke every night, I barely slept for those few years: I was running on three or four hours of sleep for most nights. Every evening I was excited to fire up my concrete brick of a laptop, check out the latest KDE CVS and taste the latest crack of the day. This inspired me to want to contribute to the project in some way.

It was a bit of a trial by fire. I was not only learning C++ but also Qt and the KDE bindings. To be frank, I was not very good. But I tried hard, I learned a lot, and mostly importantly, I had a lot of fun.

Throughout this time I wrote a bunch of little programs. One of these programs was called KWebStat, and this what I re-read about the other day. Using the wonder of the Wayback Machine I managed to find the old homepage for it which included a screenshot: 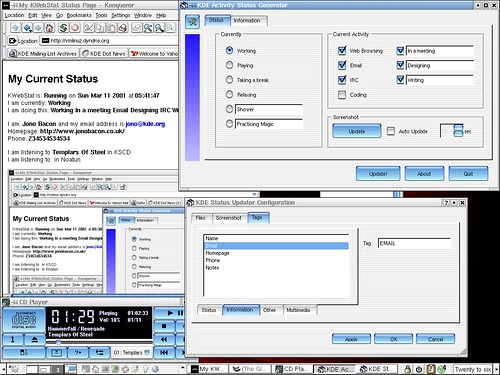 When I read the article, I realised the program was a simple, primitive equivalent to what we now know as Twitter: it put a current status update online. KWebStat was a little different: instead of writing a message, you could click some buttons to indicate what you were doing at that moment, and you could set custom activities to show. KWebStat was a lot more primitive than Twitter though: it updated a static HTML page and you needed some magic to get that page online, but the basic premise was there. There were a few niceties though: KWebStat could grab which song you were listening to in your CD or music player as well as grab a screenshot and put that online. It was a pretty primitive first implementation of status-blogging, and I used it on my old homepage.

So, if the Twitter folks would kindly send over a portion of that mountain of gold that they have, it would be appreciated.