LifeHacker and Ubuntu: A Response

Recently LifeHacker had an article talking about five things they would like to see in Ubuntu. The article is very supportive of Ubuntu, and we appreciate that LifeHacker folks, and I wanted to follow up with a few notes about each of the five areas they focused on, particularly with relation to the recently released Alpha 5 development snapshot of the up-and-coming Ubuntu 9.10 Karmic Koala.

An App Store better than Apple’s

Work really started in earnest in this cycle on this feature in the form of the Ubuntu Software Store. Our design team worked hard to build simple, usable, extensible design and documented it here. Work then started on the development of the application by the always excellent Michael Vogt. While still under heavy development, right now it looks like this: 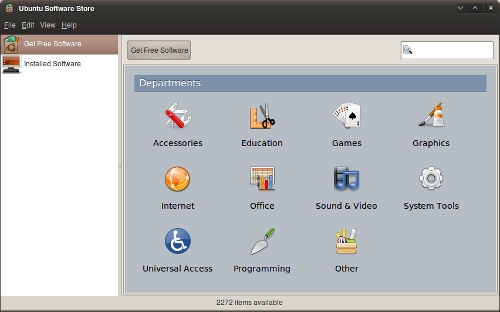 The focus of this tool pretty much matches what LifeHacker are craving, and the spec outlines the design and thinking that has gone into it. Karmic will ship a first cut of the Ubuntu Software Store, but it will be simple. You can expect further refinements in the Karmic+1 release.

The article also mentioned apt url (https://help.ubuntu.com/community/AptURL support), which Ubuntu has supported since Ubuntu 7.10 Gutsy Gibbon. This makes it simple to provide links to Ubuntu software right from a web page and we encourage more folks to use it. 🙂

Boot experience has been a solid focus on the Karmic cycle, and you can read the specification here. The primary focus in this cycle has been reducing boot time and prettifying the boot experience and some incredible work has gone into this area.

This cycle won’t include a graphical OS selector, but this is specced and planned for the Karmic+1 release.

As for the comments on virtualization in the article, it is simple to install VirtualBox and other virtualization options on Ubuntu, but currently it is not much more integrated into the desktop or installer.

A wave of right-brain rethinking

As part of the efforts in going into the Ayatana Project, you can expect to see some really compelling user-focused design and development work landing in Ubuntu. We have already seen improvements such as the new messaging indicator, notification system, fast user switching features, better printing integration and easier installation of codecs, and Karmic is slated to ship further improvements to the messaging menu, particularly around micro-blogging. Karmic is also featuring the first-round of improvements in our 100 paper cuts scheme which is seeking to fix lots of little nit-noid annoyances in the desktop, and this has been really successful so far.

The future holds some exciting prospects as the Ayatana team helps really focus Ubuntu on a user-focused, productive and information centric environment. Remember you can be a part of the Ayatana project, go and join up here.

I think LifeHacker are going to impressed with the further developments in Ubuntu over the next few releases. Canonical has invested heavily in putting together a comprehensive design team and I am working closely with them to ensure they are in-turn engaging well with the community. All of this is shaping up to deliver solid interface improvements for our users.

Alpha 5 is shipping Ubuntu One by default which makes file sharing and synchronization simple between computers. Ubuntu One is going to offer a great platform for applications to sync with it and you can expect more new and exciting development around Ubuntu One over the next six months or so.

Speaking of the cloud, a key focus on Ubuntu is also ensuring we can work effectively with EC2 and we now release EC2 AMIs as part of our release programme (such as our current development release of 9.10 Alpha 5. Alpha 5 includes alpha images for the Ubuntu Enterprise Cloud (UEC) and Amazon’s EC2. You can try out the latest Karmic server alpha instantly on EC2 using a preconfigured AMI, or download an image and put it into your own cloud with UEC. For information on using Ubuntu UEC on Amazon EC2, see the EC2 Starter’s Guide.

While we currently don’t ship a video editor out of the box, we have some compelling options on the horizon. These include:

As we see these applications mature, they will be easier to consider for official inclusion in Ubuntu.