I just wanted to share something with you. This is my desktop today, running on my Natty USB keyring (remember you can play with Natty too from the safety of your keyring by reading this): 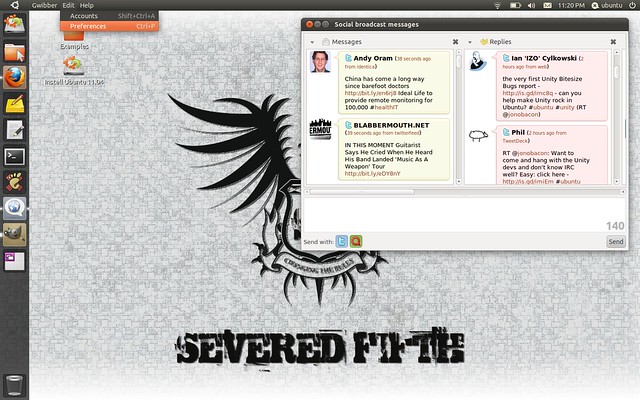 This is Unity running, and a recent addition is intellihide in the launcher. This is where the launcher will only show if a window is not obscuring it (just like in GNOME Do). As such, in the screenshot above we can see the launcher as Gwibber is a smaller window, but if I maximize Gwibber so it takes up the full space of the desktop, the launcher slides into the left of the screen so I can access the Gwibber window easily. To then access the launcher I just hover over the Ubuntu button and it slides into view. It looks and feels really fast and sleek. 🙂

Also, the Compiz workspace plugin which is accessible from the launcher, and the Alt-Tab overlay is really slick and fast too. We are just over Alpha 1, and already Unity is feeling 100x times better than in Maverick. I look forward to the missing Unity features (e.g. Places) landing before Alpha 2. 🙂

Dig Unity? Like to write code? Well, pick a bug and help us make it better!