Over the last few months there has been some concerned feedback in some parts of the community about how Ubuntu is focused more and more on attracting new users to Ubuntu by providing a streamlined and simplified user experience. Much of this is being achieved with Unity; a new desktop interface delivered in Ubuntu 11.04, which will continue to be refined and improved upon based on user testing and feedback.

One key piece of feedback from some Unity users was a concern around the lack of configurability in Unity, and a feeling that it is a little too simple and does not expose enough of the system, for which many more expert Ubuntu users enjoy.

One take-away amidst this feedback is that the general focus of Ubuntu is evolving. While traditionally we set out to provide the simplest and easiest to use Ubuntu desktop environment, and this has not changed, this focus is become more and more prevalent as we shave off more and more rough edges on Ubuntu to make it ready for the prime-time. The problem is…some folks don’t want to loose the lack of configurability and control as we move towards the prime-time.

This is perfectly valid and reasonable feedback. Fortunately, I think we can have the best of both worlds.

Building On a Strong Foundation

Let’s first take a step back and let me explain how I think we can deliver an awesome system for both the mums and dads of the world (end users who are resistant to complexity and configurability) and power users (users who want to tune and optimize their system around their specific needs).

At the heart of Ubuntu we ship a layer-cake of components:

Most people, even expert and power users, will typically only care about a particular layer and just want the other layers to work. As an example, a Kernel fan just wants his/her desktop to work without any poking, but wants all the power and configuration potential afforded at the Kernel layer. Speaking personally, I just want my Kernel and Foundations layer to work, but I am really interested in the GNOME layer. In other words, we want the things we don’t care about to just work, and we want the full scope of control in the layer we care about.

For most end-users they don’t care about, nor should they care about, any of the layers in the above diagram. This is why we ship Unity on top of it: 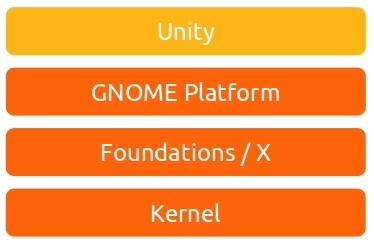 Here Unity is designed to hide all of the complexity of the underlying layers. Unity is instead designed optimize the user experience for what most end-users need; finding and starting apps, finding files, managing windows, installing new software, seeing when notifications appear etc.

Where we have seen the disconnect in these recent discussions is that some Ubuntu users feel Unity does not expose enough of the underlying layers and therefore the system is less configurable than is desired. Some suggestions as solutions to this problem are to change the focus of Ubuntu to power users and not end users, but this is how I think we can solve this…

One of the most wonderful elements of Linux is that in the vast majority of cases, power user orientated functionality is already exposed under the covers on the system (e.g. you can tweak Compiz setting with CCSM, you can re-compile your kernel if you like, you can tweak hard drive parameters with the terminal etc), it is just not exposed by the GUI.

As such, think of it this way: 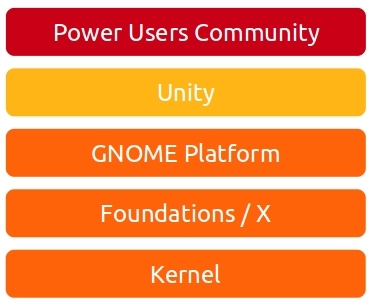 So, think of the workflow a little like this (from the perspective of a power user):

I would recommend that this community has three core components:

Unfortunately, I don’t have a huge amount of time to contribute to this community, and I think it would be great if some folks who are interested could step up to form a team to lead this work. I would be happy to provide some guidance and mentorship to those experienced in leading such a team.

So, anyone interested in leading such a community and making this vision happen? Let’s have a discussion in the comments and make some plans!

UPDATE: A mailing list has now been set up, and I recommend anyone with an interest in these more advanced Ubuntu needs joins the list. I would also like to encourage packagers and programmers to join to see how some of the ideas outlined in this post could be discussed and built-upon (e.g. a series of configuration packages in a PPA or Ubuntu Software Center).

UPDATE II: THIS TIME IT’S PERSONAL: There is now a #ubuntu-power-users channel on freenode.