As some of you might remember, I have expressed concerns at times about the physical health of some folks in our community. Some of us are overweight, spend too much time in front of a computer, have less-than-stellar diets, get little exercise, and boast about drinking too much caffeine. While I am not a health nut, and I am not trying to turn everyone into a health nut, I sometimes worry about the physical health of folks in our different communities. I want people to contribute to Free Software, but would never want them to develop unhealthy habits in doing so.

I feel really fortunate in this regard in that my wife, Erica, is a health nut. Before I met her, I used to eat like crap, rarely exercised, and I didn’t really know a lot about health and nutrition. I didn’t know a lot because I didn’t want to know a lot. Some of you may be aware that Iam a fairly social animal, and I didn’t want to be eating salads and sipping on tonic water whenever I was socializing. I am happy to be healthy, but I didn’t want to live a miserable life in the pursuit of it.

Ever since I met Erica, she has taught me heaps about how to stay healthy. It turns out that you can eat tasty food, have a good time socially, and still be healthy by just knowing a little bit more about what your options are. This is one of the many reasons I am so glad I met Erica, she not only gives me a reason to stay in shape, but she has also explained how to do it.

As such, I keep an eye on what I eat during the week, and try to eat below 2000 calories a day, I try to work out at least three times a week (a combination of metal drumming and an elliptical trainer), and try to do ten minutes of ab workout each day. At the weekend I throw caution to the wind, eat what I like, and don’t worry about working out.

Having visibility and measurements is useful when doing this. Knowing how many calories are in different foods and weighing yourself is handy, but there is another really interesting way. 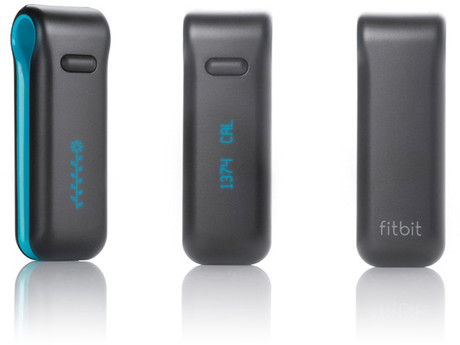 While at OSCON this week, Erica and I got chatting to a friend about the FitBit. The FitBit is simple; it is a tiny device that looks like a clip that you clip onto yourself during the day and when you sleep. The little thing measures a stack of things:

Our friend is an enthusiastic user, so we bought a few.

I have only been using it for a day or so now, but it is really interesting. The way it works is that there is a small base station that you plug into your USB port and the little FitBit clip regularly sends it’s data to the base station, which then uploads it to the FitBit website. The website has a stack of different metrics and data analysis tools and you can use it to track your calorie intake, exercise and other additional elements. It provides a complete overview of your health, and your FitBit clip automatically updates it with what you are doing.

I think it is a neat idea. There are though a few wrinkles for Open Source fans such as ourselves. Unfortunately, there is no Linux client for FitBit to allow you to update the site from Linux. I did though find that a guy is working on a tool called libfitbit and he has some code in GitHub.

He says about 90% of the tool is feature complete in terms of updating the site with your details, but he has been side-tracked with other work to finish it. He also says that the current libfitbit is written as more of a proof of concept in Python, and he would like to re-write it in C. This would then provide a means to get the data off the FitBit clip and feed it to applications.

This got me thinking. Firstly, I would love to see FitBit fully supported in Linux. I would love to see it packaged, and whenever the data is sent to the site, a little notification bubble lets you know it was successfully transmitted. But that is only the tip of the iceberg.

Going back to my previous points about worrying if members of out community are getting unhealthy, I think the FitBit could be an awesome motivational tool to help geeks get fit. What do we like to do as geeks? We like to know about numbers, and metrics, and details, and the FitBit can help us to hack our health.

I could see all kinds of potential here. People could write Free Software apps that are based on FitBit data (imagine all the potential graphing, and health programme management apps), we could have an Ubuntu/Fedora/GNOME/KDE health community in which we have competitions for who works out the most on a given week, we could hold charity walks (imagine hooking FitBit up to Kickstarter to generate revenue based on how far you walk), and people could work together to motivate each other to stay trim. Essentially, we could crowd-source the idea of getting healthy, and base it on automated data from the FitBit.

I just wanted to throw out some of these thoughts and see if anyone is interested. The first step would be a C implementation of libfitbit, and I have reached out to current author to see if he is interested in making one. Would anyone be interested in helping him? If that happens would anyone be willing to volunteer to package it for Debian/Ubuntu/Fedora?