Back in June I wrote a blog entry called Better Community With Better Technology which discussed some ideas about how we can better integrate our Ubuntu community work into the desktop. Today much of the interaction we have with the Ubuntu community is through a web browser and I feel like we have some wonderful desktop technologies that could improve how we conduct this work.

My major reason for blogging it was to share the idea — I knew I didn’t have the time to implement it myself, but I figured someone may be motivated by the notion and want to create a project that implements the idea.

Well, total-legend, Oier Mees did, and I wanted to share Oier’s work here.

You are a new developer and you are interested in contributing to a given project (e.g. Unity). You always want to know which bitesize bugs are going to be great places to start. You install indicator-bitesize and you can set which projects you are interested in and it will show the highest priority bitesize bugs for that project. Clicking on each item takes you to the Launchpad bug report with the details.

This indicator would regularly poll Launchpad to update the list when items are tended to and new items appear. The indicator would change color to indicate that there is new content.

Well, Oier got to work and created such an indicator:

The indicator looks like the one above when there are no bugs. Next you can configure the indicator for different projects: 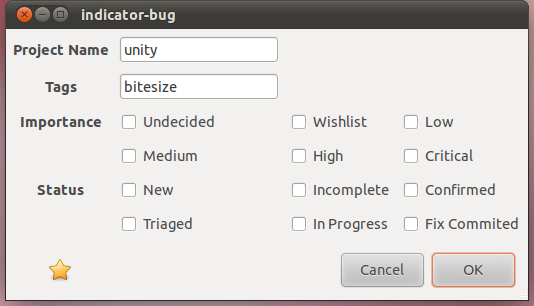 When you have added the projects you are interested in, the indicator will light up to indicate that there are bugs available:

Clicking on the indicator now shows the available bugs to review: 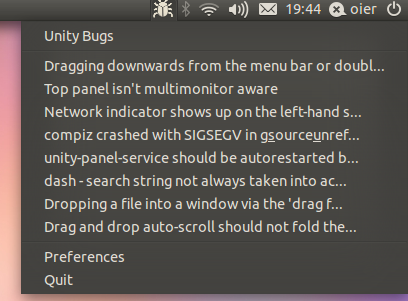 The indicator will then poll regularly and update when there are new bugs available. You are only then a click away from getting to the bug, triaging, leaving comments, or fixing it.

What is awesome is that Oier has written some code, added it to Launchpad, created a PPA and even had the indicator translated into 11 languages! Oier is looking for volunteers to help contribute to the indicator, so be sure to click the following links and get involved:

I am sure Oier will be reading the comments from this post, so feel free to ask questions there. Great work Oier!