Ubuntu: More Than The Default Install

In the Ubuntu world (and I am sure in other distributions as well), the choice of what apps we ship in the default install has always garnered much debate and discussion. With each UDS there is a default apps discussion, and the following few weeks usually involves some debate over whether the decisions reached made sense. In the past this has involved the addition of TomBoy and other Mono apps, the removal of GIMP from the default install, the addition of PiTiVi, the removal of PiTiVi, the Rhythmbox to Banshee move, and now the move from Banshee back to Rhythmbox.

Before I go on, in terms of the most recent debate: no definitive decision has been made to remove Banshee from the default install. You should read this ubuntu-desktop thread for the full details and to offer your (constructive) feedback. This blog entry is not about the specific Rhythmbox and Banshee topic discussion at UDS but a wider discussion about why I think the default app selection is less important than it used to be.

Ubuntu has always sought to present the best of breed software for our users, and this is often a moving target. Open Source is a fluid and organic environment, and what we consider best of breed often changes from release to release. Changes in quality, the vibrancy of the upstream, how well the app integrates into Ubuntu, and how it meets the evolving needs and values of Ubuntu users all play into how these apps are chosen for the default install.

I am not surprised that some consternation occurs when applications or components are proposed to be added or removed from a default Ubuntu installation. Being on the disc provides a sense of validation and acceptance to our upstreams, and provides an incredible amount of visibility to these applications.

These discussions were particularly important within the context of Ubuntu a few years back where you primarily installed new applications via apt-get or Synaptic. While this was simple for many (particularly those of us who remember the dim, dark days of compiling our apps), these tools did not offer a simple experience for our wider user-base who were increasing getting used to browsing and pointing and clicking to get what they needed.

In today’s Ubuntu however, I don’t think this is as much of an issue.

Why? Well, because of this: 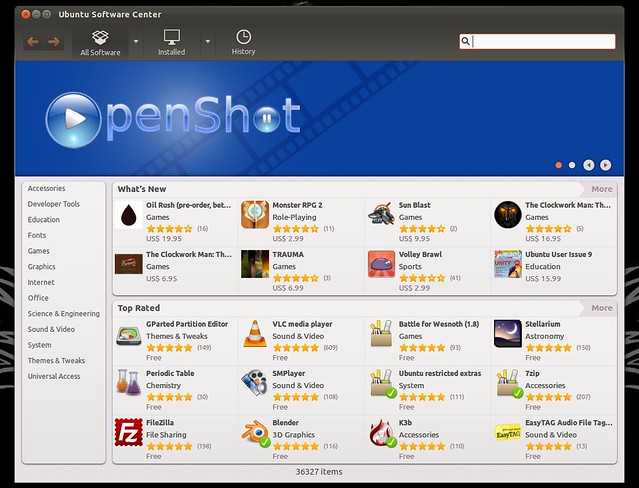 While a few years ago apt-get and Synaptic provided a means to install software for us, they lacked the discoverability and ease of use required for many novice users. In addition to this, those tools did not provide a means for a novice to identify what were the best choices for them in the sea of software available for Ubuntu. As such, for software not included in the default install, end users were somewhat in the dark about the best software they could install to meet their needs.

The Ubuntu Software Center changed all of that. Now we have a simple, easy to use facility for browsing software, seeing ratings and reviews to get a feeling for what is best of breed, and installing it with just a click. The Ubuntu Software Center has helped to make the cream float to the top. Even as a veteran Linux enthusiast, I am constantly finding new and exciting finds in there based upon the experiences of our wider community articulated in the ratings and reviews.

As such, while Ubuntu has always shipped a huge archive of available software, today the visibility on that software and the gems inside is better than ever. I think it would be a disservice for us to obsess too much on what is included on the default installation when there is a wealth of content available in the Ubuntu Software Center. Default apps are important (particularly for those in non-networked environments), but let’s not forget about the wider commons that in only a click away and all the value it offers.

Speaking personally, I think both Rhythmbox and Banshee are awesome. I personally prefer Banshee (other than some small stability issues), but if we switch to Rhythmbox I am delighted that Banshee is available in a heartbeat and that the incredible contributors in the Banshee community and the Ubuntu Banshee team are helping to ensure the Banshee experience in Ubuntu is fantastic.

This is the benefit of the Ubuntu commons; experiences not delivered in the default installation can still bring huge value to millions of Free Software users around the world. The same can be said for the many other applications I use every day that we don’t ship by default; such as the GIMP, Inkscape, gtk-RecordMyDesktop, OpenShot, Chromium, XChat-GNOME, Bluefish, Getting Things GNOME!, Lernid, and more.

I am not trying to downplay the importance of the default apps discussion — it is important, and we should handle these discussions with professionalism and accuracy in making those decisions — but let’s not forget that there is a wealth of incredible content available in the rest of the commons too.