I want to show you something rather beautiful:

He is the most interesting terminal in the world.

Behind this simple exterior beats the heart of a beast; the new Ubuntu Accomplishments server that verifies all those lovely accomplishments that are achieved using the system.

Recently I was a bit of a pickle regarding what to do about this server. I originally asked Michael Hall to provision me a server on our Canonical OpenStack (known as ‘CanoniStack’), but this service is really intended for testing OpenStack and Ubuntu, so I needed something that wasn’t going to change as much due to these testing circumstances. With the Ubuntu Accomplishments project still very much in progress, requesting a server for a production environment wasn’t going to work (as this would mean me bugging IS to update the machine as development progresses). As such, I needed something with the convenience of CanoniStack, but that was not intended as a testing environment.

As such, I was running the server on this little baby: 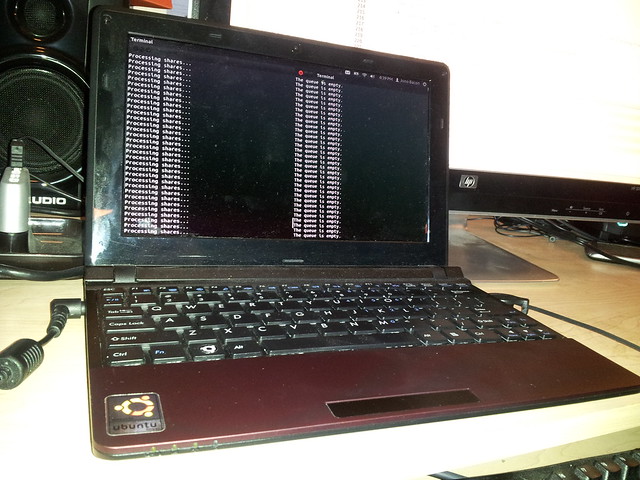 Obviously this wasn’t going to scale, so I reached out to my friends at Bytemark Hosting who helped hook me up with an instance on their rather exciting new BigV cloud service. So far everything is working great. 🙂

This is not the first time Bytemark have been incredibly generous to the Free Software and Free Culture community. Bytemark have also supported LugRadio, Severed Fifth, and various other projects, as well as sponsoring every year of LugRadio Live. They have also always provided fabulous service and support; I run all of my servers with Bytemark for this very reason. So, I know this sounds like a bit of an ad, but I felt it was fair and reasonable to give a bit of a shout out to Bytemark for supporting this project, and many others. Thanks, Bytemark!