Eagle eyed readers may have noticed I have been talking a lot about Ubuntu Accomplishments in the last few weeks…more so than usual… Well, to put it bluntly, my wife has been out of town for a few weeks and as such my evenings have had my husband time replaced with sitting in a darkened room, surrounded by empty Lean Cuisine trays, sipping on coffee, hacking to the sound-track of Gov’t Mule. If I had more hair, I really would feel like was 18 again. 🙂

Anyway, enough of the goings on at Castle Bacon, so what is the latest in the Ubuntu Accomplishments camp? Well, I have some fun things to share…

We are now officially on the road to 0.2. We have decided to codename our releases after notable accomplishments in history, so the next release will be codenamed lightbulb and has a release date set for Tues 12th June 2012. You can see our targeted bugs lists (daemon : viewer) to get a feel for what we have yet to do.

While on the covers 0.2 might seem a small and incremental release, there has been a lot going on as we work to bring quality and precision to the code and the user experience.

The 0.1 release was an important milestone for us. With over 230 people testing it and over 900 trophies issued, we were shocked pleased to see a surprisingly low number of bug reports coming in.

0.1 also helped us to identify the deficiencies in our current API, so we planned on maturing it significantly for 0.2. Rafal Cieslak did a stunning job implementing this work and the API is not only more mature and more consistant, but faster and better testable.

As our accomplishments collection has started grow, it has been clear that we needed two features that were not in 0.1:

To focus on this work I put together a mock-up and explored some different ideas of exposing this cleanly. This was the final design: 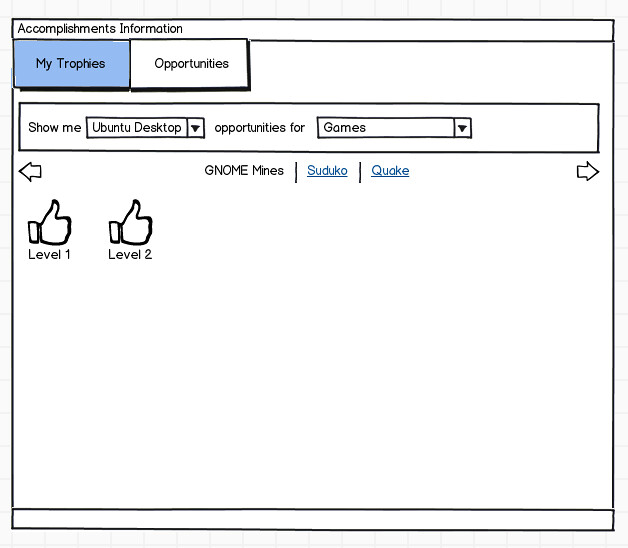 Over the weekend Rafal and I tag-teamed this one; Rafal built the support into the API and I built the front-end support for this in the client. It now looks like this: 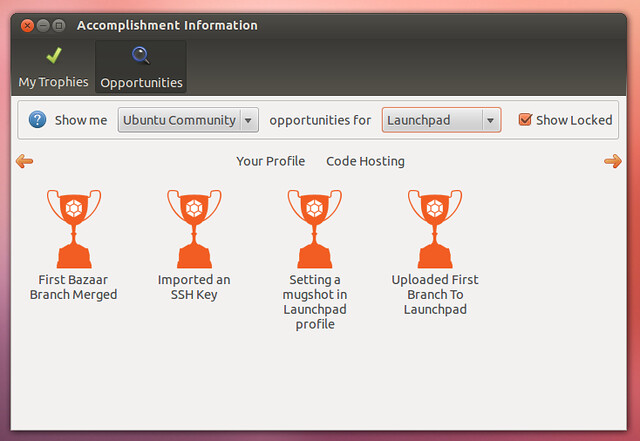 Another lesson from 0.1 was that while most accomplishments only need one other opportunity completing first before it can be unlocked, some need more than one. As an example, On Planet Ubuntu requires you to have a SSH key and be an Ubuntu Member. As such, we built in support for multiple dependencies.

Now the client show which dependencies you have yet to accomplish before the opportunity is unlocked: 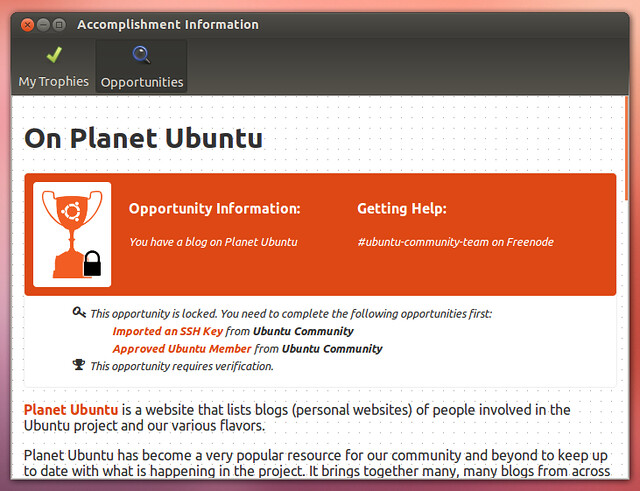 Credit Where Credit Is Due

As such, we wanted to be able to expose these contributions to our clients. To do this we built support into the API for an author field in each accomplisment, and clients can now display this in their help dialog box. Here is the official client showing off the credits: 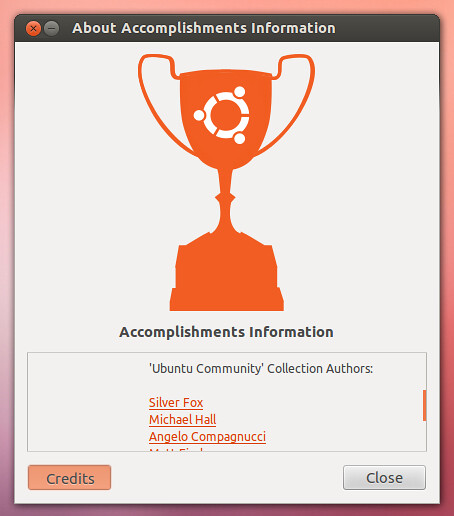 The default behavior is that it will show the contributors for each collection you have installed as well as the core system.

One of the most pleasant outcomes of 0.1 was getting many different accomplishment contributions from the community. In total we have added the following to the Ubuntu Community Accomplishments collection:

Do you know what is exciting about the following screenshot?

UPDATE: After I posted this I added support for local accomplishments to the Accomplishment Information app itself. See a short video demo below:

In addition to this more visible work, there has been lots of other things going on as we clean up our code base and bring maturity and predictability to the project. This has included:

I just want to say a huge thank-you to everyone who has been participating in the project! I am looking forward to 0.2 as another important milesone. I will be following up in the next week about areas in which we are looking for help in the project that you might be able to contribute to.