On Sunday last weekend I flew out to CES to join the rest of my colleagues to exhibit Ubuntu at the show. We were there to show the full range of Ubuntu form-factors that we have available; desktop, TV, Ubuntu for Android, and most recently, Ubuntu for phones.

The Ubuntu booth was located in the South Hall within the cornucopia of screens and gadgets that is CES. The show is huge, really, really, huge, and one could be forgiven for thinking that Ubuntu would be a mere drop in the ocean when you have exhibitors such as Samsung and Sony with their warehouse sized booths. Fortunately, Ubuntu seemed to be one of the highlights at CES.

Although many people were there to see Ubuntu for phones, the phone is really only one part of the true magic of Ubuntu’s focus and direction; a single ubiquitous convergence story that runs across every device you care about and the cloud. This is a story that is a lot clearer when you see each of these different form factors sitting side by side in the same booth, it really helped to connect the dots with our visitors. 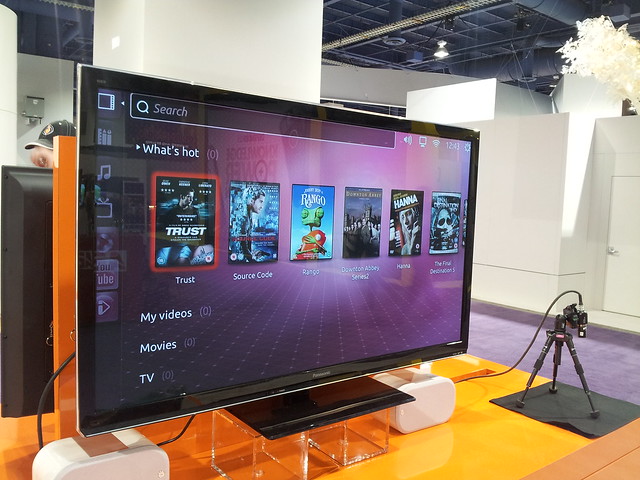 Ubuntu is about delivering a beautiful user experience that is perfectly tuned to the screen you are using, yet consistent in design and content across these different form factors. If you have used Ubuntu on the desktop, Ubuntu on the phone and TV looks and feels familiar. We have worked to build the content that you own (and the content that you could own) into the core of the platform, as opposed to it being buried in applications that you need to juggle to access it. We have worked to liberate web apps from the browser tabs that they are trapped in to integrate them with the core of the platform, and we have reduced the on-screen clutter that gets in the way of your content. Ubuntu One provides the connection points between these screens with your personal cloud in which your files, content, settings, and other content is neatly synced between all of your devices; as an example, if you buy or download a new song on your phone, it will sync effortless to your desktop, TV and other devices. This convergence presents a consistent design, user, and content experience across all of your devices, and underlined by Ubuntu; a platform that has a long heritage of openness and community participation.

Our booth at CES was comprehensive. We had two large TVs with high quality cameras attached on either side of the stand where we did demos of the phone to interested passers by. In between these screens we then had stations for demonstrating Ubuntu for TV, Ubuntu One, Ubuntu for Android (which also demonstrated the Ubuntu Desktop), and the Ubuntu developer platform. Between these stations we gave out bags, t-shirts, literature, caps, DVDs, and other material. 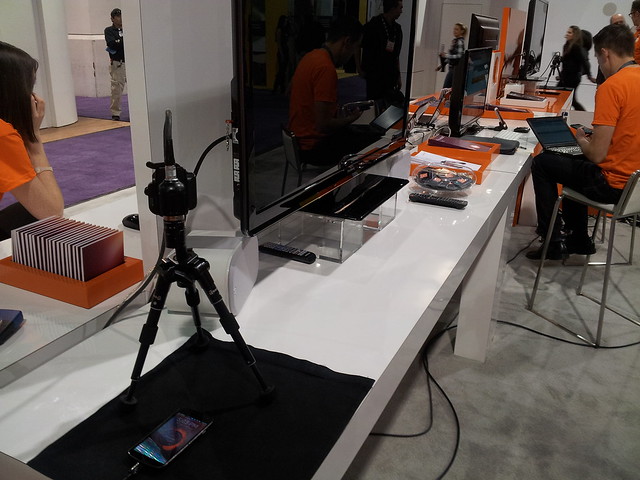 An Ubuntu for phones demo station.

At the far end of the booth we also had our meeting room. With CES being a trade-only show, a primary goal for attending was to work with handset manufacturers and operators to explore how they can deliver Ubuntu to their customers. Mark Shuttleworth (founder of Ubuntu/Canonical), Jane Silber (CEO of Canonical), and Chris Kenyon (Head of Business Development at Canonical) spent most of their time in the meeting room talking with potential customers. Fortunately, their calendar was packed throughout the week with meetings and great progress was made.

I spent most of my time at the booth presenting the phone on the big screens to the crowds that visited us. Now, I am not using the word crowd here in an exaggerated sense either – the Ubuntu booth was packed throughout the week, and most people who I spoke to told me that one of the main reasons they came out to CES was to see Ubuntu and in particular to see Ubuntu for phones. 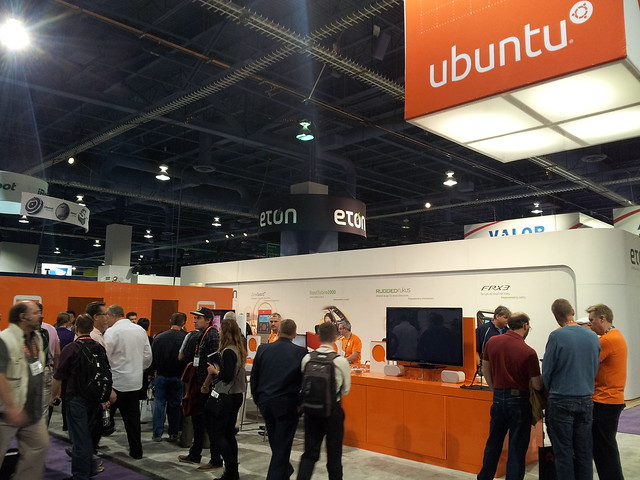 We saw a constant stream of visitors throughout the show.

We also had a huge number of press come along to the booth and myself as well as many of my colleagues did countless demos both on and off camera to these members of the press. Speaking of press, I was delighted to finally meet Timothy Lord from Slashdot and I did a short interview and demo with him. I saw that a video of one of my demos is available online as well as some questions about the phone that I answered. Also, be sure to see SJVN’s write up about Ubuntu for phones.

I have done trade-shows before, and I have exhibited Ubuntu many times at these shows. Although I had never done CES, I had done something similar in style and size (CeBit in Germany), and I had a broad idea of what to expect. Fortunately the show more than surpassed my expectations. We were absolutely inundated with people, and every time I gave a demo of Ubuntu for phone the audience smiled with interest as I walked them through the different features of the phone. Ubuntu for phones was very, very positively received, and from a “things often go wrong when demoing at trade-shows” perspective, we didn’t experience a single crash or failure with the phone (or anything else that we demoed). The only problem we had was rather flakey Internet access which impacted me demoing the deep integration of websites and social media into Ubuntu for phones.

We also had a few other fun things happen. The week set off on the right foot when we won the Editors Choice award at CES from Popular Mechanics magazine, and we also had will.i.am from the Black Eyed Peas show up to see the Ubuntu phone. We were also expecting MC Hammer to visit us, which unfortunately didn’t happen, but infamous hacker Kevin Mitnick did make an appearance, to which my colleague Michael Frey and I swooned like Justin Bieber fans.

All in it was a tremendously productive and positive week.

I have never been so excited to be part of Ubuntu and part of this convergence story that we are creating. Not only is this a great opportunity for Ubuntu, but it is a great opportunity for Open Source and Free Software, which continue to drive the ethos and values that form Ubuntu. Everything that we exhibited at CES is Open Source, and our community are a core part of how we build this platform and bring it to the masses.

We have the potential of building a an ubiquitous platform that is simple and elegant for anyone to use, but driven by the values of Free Software. This is what freedom is all about; freedom of technology, freedom of choice, and freedom that is accessible to everyone. Let’s do this.