A while back I posted about my new passion for BBQ. I haven’t talked much about it since my last post and I had a little time tonight and thought I would share what has been going on. There isn’t anything about Ubuntu in this post, so feel free to move along if you are looking for Ubuntu-related shenanigans.

When I first got into BBQ it was because I like to eat it and I am fortunate enough to live in a part of the world with pretty decent weather and many locals who cook outside. When I started out I was more interested in grilling (most Californians tend to grill when they cook outside) but as I started learning about grilling online, my reading led me to learning about smoking, and smoking is what real BBQ is about.

I was instantly fascinated by smoking. On one hand I loved the BBQ food I had eaten before in restaurants, but there was also something really exciting to me about cooking over fire. My life is so filled with technology, buttons, and gadgets, that the idea of creating something awesome on a fire with no electricity or gadgets really…fired me up. Enjoy the comedy, I am here all week. 🙂 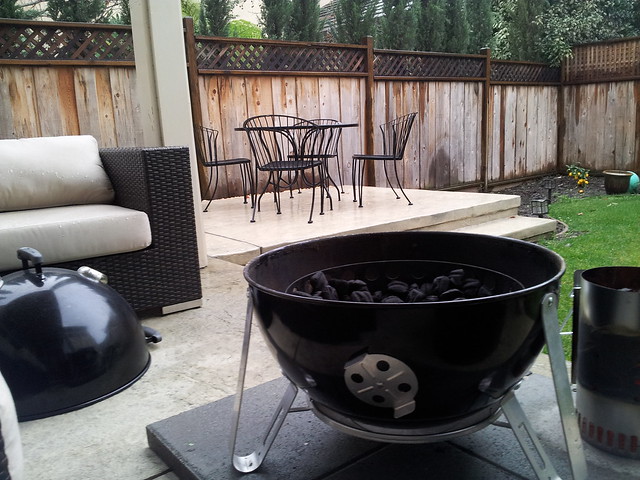 Firing up the pit on a rainy day.

With my initial interest in seeing if I could create some BBQ that I would like to eat, my curiosity was fueled further (the comedy just a’keeps on coming) by the fact that there isn’t a lot of particularly incredible BBQ where I live. California is known for many things, but BBQ isn’t really one of them. For great BBQ you need to get out to Texas, Georgia, the Carolinas, Tennessee, and Kansas. Interestingly, BBQ varies significantly between these different parts of the country, not just in flavor, but also in the science of how it is made.

Now, I know what you are thinking:

There is a tremendous amount of science in all aspects of the preparation and cooking process in BBQ – how to choose your meat, methods of cutting and preparing it, the benefits and disadvantages of using brines/marinades/injections, different smoker types, approaches to using water and spritzing, foiling techniques, the impact of weather conditions, temperature control, different fuel types (e.g. charcoal vs. stick-burning), sauces and mops, and different rubs and the impact of their ingredients. Each piece of meat also has very different methods of preparation, so all of these variables get shaken up with each cut and animal you cook.

The more I read and played around with different techniques in my BBQ, the more it has fascinated the engineering side of my brain. 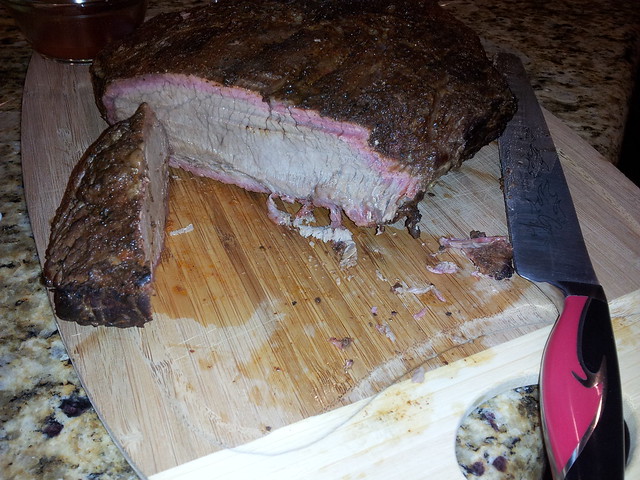 My brisket from a few days ago. Loving the smoke ring.

Since I last posted I have done quite a bit of experimentation. I have smoked brisket, baby back ribs, pork shoulder (to create pulled pork), chicken, turkey, and even a few ducks. Every meat is different, has it’s own quirks and techniques, different flavor profiles and more. Each is a little engineering puzzle to take these many variables of meat, rubs, fire, weather, and more, and produce predictable and delicious results.

My primary goal has been to try and get the quality of the main competition categories up to scratch; brisket, chicken, ribs, and pork shoulder. So far I have had good results with pork and ribs, a few good briskets, but my chicken still needs some work.

I have also wanted to master the kind of BBQ people enjoy in the backyard as well as at competition. As an example, lots of people (myself included) love ribs that fall off the bone. If you were to cook in a BBQ competition though, fall of the bone ribs are considered over-cooked. A competition rib should be tender enough that you bite into it and it leaves a bite-size hole. One day I want to try my hand at competing, and I might try it in a local King Of The Country contest later this year, but I have a lot more practice to do. 🙂

Anyway, despite my variable results, this little journey has taught me an important lesson. Before I moved to the US I was convinced that I was by pure definition a shitty cook. Everything I had tried to cook in the past lacked flavor, generally went wrong when I cooked it, and was a million miles away from the kind of chow I would eat in restaurants. I was convinced that it was impossible for me to ever master any kind of cooking – my brain was simply not designed for making good food.

What broke me out of this was a desire to be able to feed my family and friends good food in a social setting. 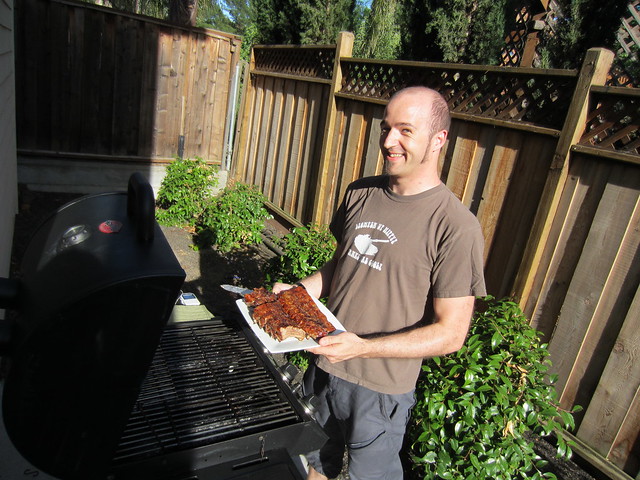 Grilling some ribs for some friends.

BBQ is inherently social. Usually people grill and smoke when they have a bunch of friends over on a nice warm day, blowing the froth of a few cold ones while stood around the grill or smoker, and just having fun and then eating some good food. I wanted to be able to have my family and friends come over and want to eat my BBQ and have a great time while here.

Consequently, going from a fear of cooking for people due to my built-in view that my brain is not cut out for making great food and transitioning it to a confidence about cooking and enjoying people eating my good, has been quite a journey. This is still a journey I am still traveling on, but I am loving the ride.

This interest in BBQ has not escaped the interests of my family, and this Christmas I had something of a BBQ themed set of gifts.

As a little bit of background information, since I got into BBQ I have also been following some of the competition cooks who compete at BBQ competitions around the country. One of these cooks is Myron Mixon, who has won nearly a million dollars in prize money and is one of the stars of the TV show BBQ Pitmasters, which I have become an avid fan of.

When I first learned about Myron I bought his New York Times bestseller Smokin’ with Myron Mixon. The book is fantastic both in terms of the story behind his work as well as cooking guides and tips.

Well this Christmas my always thoughtful wife, Erica, decided to go to Myron’s [Jack’s Old South]((http://www.jacksoldsouth.com/) site and buy me every rub and sauce that they make. She wanted to get me everything so I could experiment and try them out in different cuts of meat. I have only used a few of the rubs and sauces so far, but they are incredible. 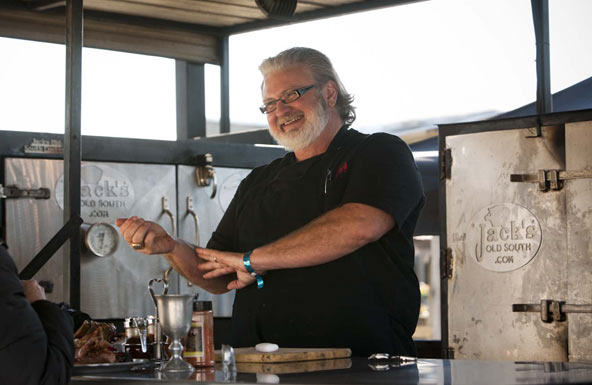 Although the rubs and sauces were awesome enough, I didn’t expect what came next. It turns out that Erica had been plotting with my father-in-law, and he also booked me and him into Myron Mixon’s cooking class in February. This is a weekend-long class delivered by Myron himself, at his house, where he teaches you how to smoke various cuts of meat, as well as doing a whole hog (a whole pig on a brick pit). The class kicks off on the Friday night with dinner at his house for the students, and then runs all day on Saturday, dinner on Saturday night, and then there is competition-focused cooking on the Sunday. It all takes place in a little place called Unadilla, in the heart of Georgia, one of the main BBQ states in the USA.

To say I am rather excited about this trip is an understatement. It is going to be fun just going out to Georgia, but to also not only meet Myron but also learn from arguably the most talented BBQ cook in the USA is going to be incredible.

So all in all, BBQing is fun, and I recommend you all to give it a shot yourself. Pick up a cheap smoker, grab some meat, read one of the best sites online for BBQ, crack open a few cold ones, and have some fun. 🙂