Ubuntu has always been about breaking new ground. We broke the ground with the desktop back in 2004, we have broken the ground with cloud orchestration across multiple clouds and providers, and we are building a powerful, innovative mobile and desktop platform that is breaking ground with convergence.

The hardest part about breaking new ground and innovating is not having the vision and creating the technology, it is getting people on board to be part of it.

We knew this was going to be a challenge when we first took the wraps off the Ubuntu app developer platform: we have a brand new platform that was still being developed, and when we started many of the key pieces were not there such as a solid developer portal, documentation, API references, training and more. Today the story is very different with a compelling, end-to-end, developer story for building powerful convergent apps.

We believed and always have believed in the power of this platform, and every single one of those people who also believed in what we are doing and wrote apps have shared the same spirit of pioneering a new platform that we have.

As such, we want to acknowledge those people.

And with this, I present Ubuntu Pioneers.

The idea is simple, we want to celebrate the first 200 app developers who get their apps in Ubuntu. We are doing this in two ways.

Firstly, we have created http://developer.ubuntu.com/pioneers which displays all of these developers and lists the apps that they have created. This will provide a permanent record of those who were there right at the beginning. 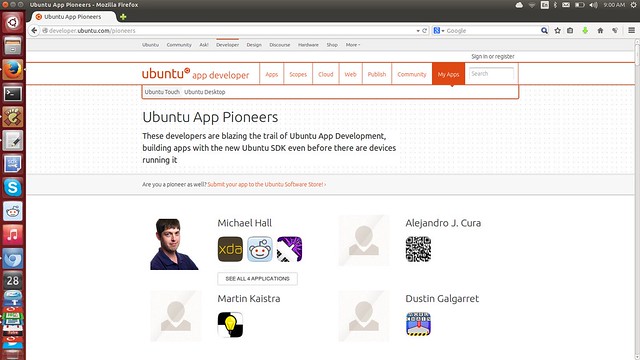 Secondly, we have designed a custom, limited-edition Ubuntu Pioneers t-shirt that we want to send to all of our pioneers. For those of you who are listed on this page, please ensure that your email address is correct in MyApps as we will be getting in touch soon.

Thank-you so much to every single person listed on that page. You are an inspiration for me, my team, and the wider Ubuntu project.

If you have that pioneering spirit and wished you were up there, fear not! We still have some space before we hit 200 developers, so go here to get started building an app.