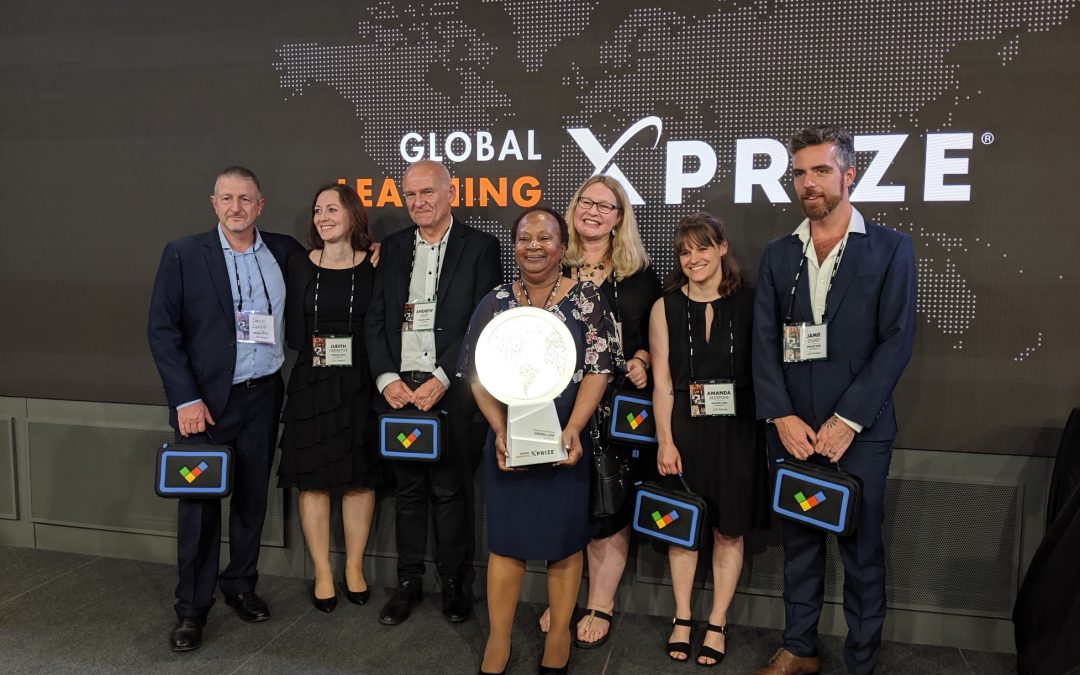 Back in 2014 I worked at the XPRIZE Foundation. One of the major reasons I joined was to help launch the Global Learning XPRIZE. This was a $15 million competition, largely funded by Elon Musk, that challenged teams to build an Android app that teaches kids basic reading, writing, and arithmetic, without the aid of a teacher, within 18 months.

When we launched this prize we were astonished by the response. At the time I launched our Global Learning XPRIZE crowdfunding campaign (which raised just under $1 million with a $500k goal) and the new XPRIZE community, and the excitement was palatable. Over 180 teams submitted entries.

These teams were narrowed down to five finalists and extensive field testing trials happened in Tanzania. This in itself was a behemoth task to get tablets and electricity out to such remote areas. This video provides a good overview of this work:

Well, this week the competition came to a close. On Wednesday I flew to Los Angeles to join the awards ceremony at the Spruce Goose Hanger at Google. Peter Diamandis kicked the event off, Emily Church introduced the teams, Levar Burton (yep, the guy from Star Trek) did a short speech, and Elon Musk swung by to award the teams before jetting off (no pun intended) to do a rocket launch.

Of the five teams, KitKit School, Team CCI, RoboTutor, onebillion, and Chimple, there was a tie and KitKit School and onebillion were crowned winners. They will split the $10 million prize purse.

It was a fabulous evening and it was wonderful to meet all the teams and see the energy and passion from everyone there. Here are some pictures from the ceremony.

Also, here is the live stream of the event:

Now, while it was fantastic to see the awards being delivered, what was most interesting to me was the overall impact of these entries across reading, writing, and numeracy:

Clearly the teams have developed software that really does meet the goals of the challenge: to provide a marked improvement in education for kids who don’t have access to teachers. This is an incredibly encouraging start.

The good news is that all five finalist’s code has now been uploaded to GitHub. You can find the repos by clicking here. All the technology that is driving these educational gains is built for Android is now available under an Apache open source license and the general open source community is welcome to participate.

In addition to this, the XPRIZE team have set up a discussion forum. This is brand new, but I would encourage those of you who are interested in this project to go and check it out.

Now, as you can imagine, these are five pretty significant codebases, and each has unique attributes. For example, Team CCI has built an authoring platform where you can produce content without coding (similar to Flash). RoboTutor have built an AI-powered voice recognition platform so kids can read the words on the screen, it will listen, and then read back the correct word.

I really want to see this code as the beginning of a new era of educational software that can impact the 250 million+ kids that need access to high quality education delivered via tablets. I can’t think of a better opportunity to built a community around a more meaningful mission

For these projects to succeed though I believe we need to focus on the following key areas, all of which need volunteers (wink wink!):

With the code now available, I want to encourage you all to go and download these projects, play with them, and start participating.

File issues with bugs and feature ideas, submit pull requests, and reach out to the teams. Feel free to share your ideas and offers of help on the community forum.

#2. Modularize the best elements of the different codebase

I don’t think it is realistic to expect all five of these projects to converge under a single initiative, they are likely too different. I do though think we should try to modularize some of the key tech (such as the examples I gave above) into individual projects.

I am going to reach out to the teams to see what kind of appetite they have for this: from my discussions yesterday, it seems like there is interest in doing this. This will make it easier to collaborate and expand the contributor base.

If we can modularize these pieces and get more of the projects using the same common pieces, it will grow those foundational elements faster as more devs can contribute. As an example, TeamCCI has already offered to fund $100,000 worth of educational content development for the other teams if they use their core Pubbly platform (which is now open source in GitHub.)

Each of these projects is available in English and Swahili, with some of the teams also being localized into Hindi.

These projects should be available in multiple languages, not just the strings, but the content too. With every new language there is the possibility of this software impacting kids in those regions too.

#4. Create documentation for the community and project

With five big new codebases, we could benefit from docs writers to build and maintain a wiki for the project. How to build the projects, join the community, submit pull requests, submit art/design assets…this all needs documenting. Do you want to make an impact on education around the world and do you like writing? Roll them sleeves up and get involved!

So, if you are interested in getting involved, head to the community forum, sign up, and weigh in. There is enormous opportunity here to have an impact: let’s make it happen.