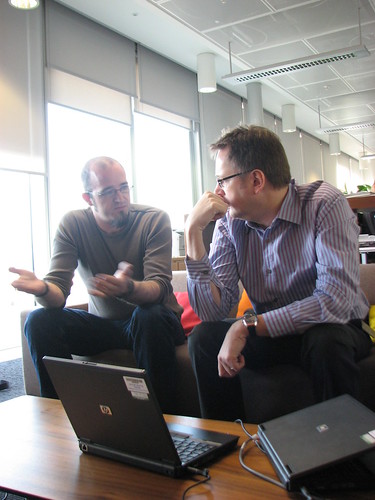 The original meeting with Ashley, back in February

As some of you will remember, a while back I went to London to see Ashley Highfield, the Director Of Future Media and Technology to talk to him about Ubuntu. It was a successful and productive meeting, and Ashley was interested in Ubuntu and Open Source.

Well, today Ashley has written up a blog entry reporting his experience using Ubuntu. I think it is a broadly positive review, and at the end of the blog entry he says “Critically though, I think the BBC can, and should, do more to support the Free and Open Source community, and I hope this has at least shown my commitment to listen and learn!“. Good man.

I threw this into Digg so lets get this on the front page of the Linux/UNIX section – GO AND DIGG IT!