I also want to say a big thanks to Matt Asay’s coverage of Severed Fifth on CNET. Thanks Matt! Big thanks also to Ryan Busch who is going out and about spreading the Severed Fifth word in Michigan. Keep up the great work Ryan!

I also wanted to show off a new information document about Severed Fifth: 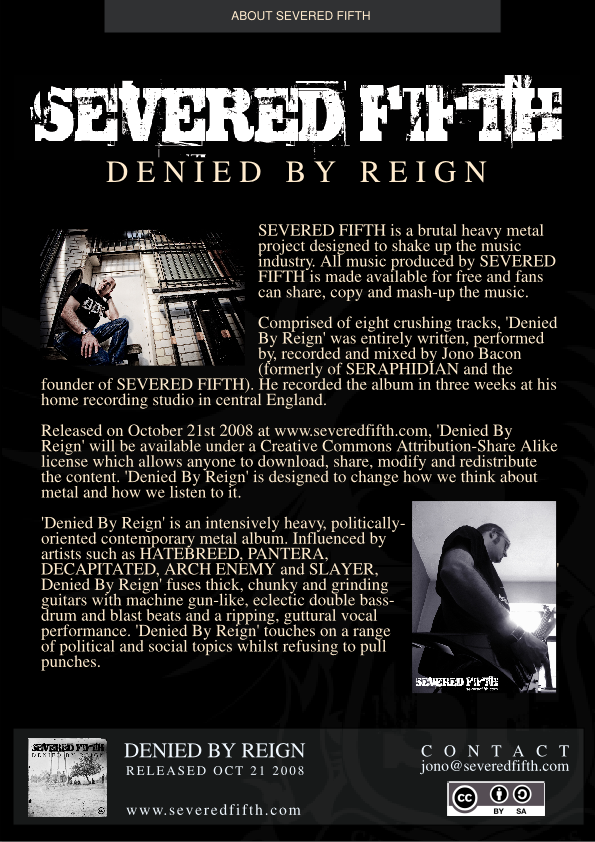 Go and grab the PDF of the page, and you can also grab a PDF Poster which I showed a few days back.

Denied By Reign is released on Oct 21st from www.severedfifth.com and the entire album will be released under a Creative Commons Attribution ShareAlike license with expressed aim of seeing how far an independent musician such as myself can push and promote an album under the new music economy of free culture. My aims are to help answer some of the questions that are unknown about the viability of a free culture music economy. For more details on the aims of the project, see the announcement.

Severed Fifth needs your help to be successful! Go and join our Discussion Forums and join the Street Team. We will need your help when the album is released to push it as far and wide as possible and just see how much juice we can squeeze out of a free culture album. If you have contacts in the music press, or you know established artists who may be interested in hearing it, do get in touch with me. I am preparing a press pack for the album which we can all send out when the album is released. Oh, and for you Facebook fanatics – go and join the Severed Fifth Facebook Group.

I just want to thank everyone for their support of the album and the project. Thanks also to the Creative Commons for their continued support. 🙂