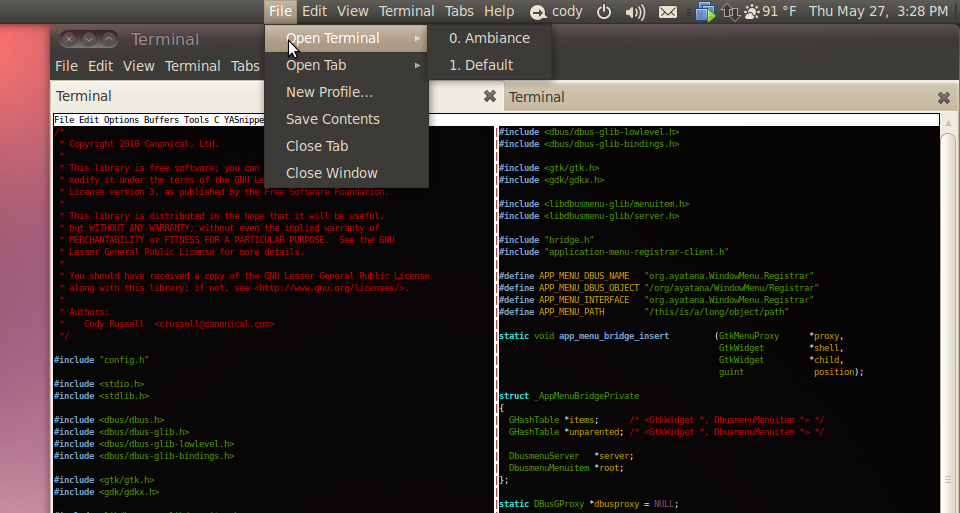 In the Ubuntu 10.10 cycle we have committed to implementing application menus in the Ubuntu Netbook Edition release of Ubuntu. There are many benefits to this approach, but I will you to the design rationale that was announced recently. I personally think this is going to be a tremendously valuable feature and continues to optimize Ubuntu for screen real-estate.

To satisfy this feature, the Desktop Experience team have produced an implementation called indicator-appmenu which has been worked on by the always awesome Cody Russell and Ted Gould. The implementation essentially re-routes application menus over dbusmenu so that they can appear in the panel; the technology is based on the same technology that drives the application indicator framework. Aside from the design rationale benefits, the implementation also supports GTK and Qt menus out of the box and will render Qt menus in GNOME with GTK widgets and vice versa. All in all I think it is hugely exciting work.

For the majority of applications that use standard menu widgets, applications should just work out of the box. We are though keen to test as many applications as possible to ensure they work and identify problem spots. Like the last cycle, this new code has been released very early for testing and improvements, and we are keen to have as many folks test, file bugs and where possible file patches to fixes.

To make this as simple as possible, this page explains how to download, test and provide feedback. Importantly, you don’t have to be running Ubuntu Netbook Edition to test – you can use the normal Ubuntu desktop edition!. Packages are already available in a PPA for Lucid and we have listed all of the apps that could do with some testing. We have also includes instructions for how to file bugs for apps that have issues; this will make it easier to produce fixes. One important note: up until alpha 2 we are deliberately leaving the menus switched on in both the application and in the panel – this provides a great way to compare and contrast the normal app menu with the panel menu to ensure they are the same.

Thanks to everyone who participates in the testing; this is sure to make the Ubuntu Netbook Edition rock even harder. 🙂